Google Doodles For the Win! 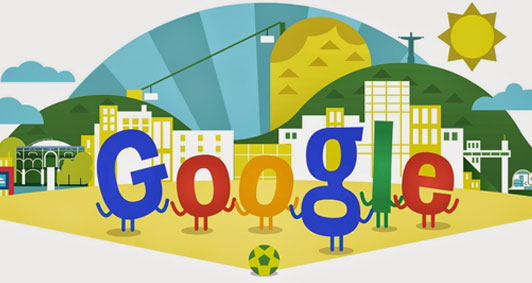 Google joined the rest of the world in celebrating the 2014 FIFA World Cup–in the form of doodles. Throughout the World Cup, Google created 63 Google Doodles, inspired by competing teams and the soccer culture, and showcased them on the Google homepage to the entire world.

Google Doodles are the fun changes made to the Google logo to celebrate holidays, events, and individuals. The idea of decorating the company logo to mark events was born in 1998 when Google founders Larry and Sergey included a stick figure within the “o” in the corporate logo to indicate they were “out of the office” attending the Burning Man Festival. Since then, Google Doodles have become so popular that Google has dedicated a team of talented illustrators (or doodlers) and engineers to create doodles to refresh the Google homepage. A group of Googlers gather frequently to brainstorm and decide which events they will commemorate with a doodle. So far the team has created over 2000 doodles for their homepage.

For the first time, Google sent some of its best doodlers to Brazil to experience the event first-hand, gaining creative inspiration from their surroundings. The team created doodles in São Paulo each day as the matches were played. Their work environment included an office with whiteboard walls, three flat screen TVs streaming World Cup matches and immediate social media responses, and an array of soccer equipment.

While in Brazil, Google Doodle Designer Matthew Cruickshank simplified his complex drawings until he reached his finished doodle image. From there the team illustrated and animated the doodle and finally placed the doodle onto the Google homepage. Clicking on the doodle sent viewers to a landing page with World Cup info, including game schedules and news about each match.

The last doodle created in the World Cup 2014 Google Doodle series celebrated Germany’s 1-0 victory over Argentina in the final match on Sunday. The Google letters are dressed in the colors of the German flag, celebrating their country’s win. To see all of the Google Doodles in their animated glory, visit www.google.com/doodles